Ruud Borgman is born in the city centre of Amsterdam. His parents decided to move out of the crowded city when he was just 6 years old. They settled themselves in Oudendijk, a tiny village in the countryside. A big difference for a child. Living between farmers with their own dialect and speaking with a dialect from Amsterdam himself. Despite this, he had an fabulous time while being raised up. Riding with his horse as much as possible, ice skating on natural ice and enjoying the enormous space to paint everything he saw.

He became intrigued by the people who worked and lived in the countryside. ‘Raw’ people, without any appearances. People who are who they are, and who don’t pretend anything. This became a leading essence in his artwork. When he went to the the big city for his study he did find such ‘raw’ people as well in Amsterdam. Inspired by the farmers, he found out that every person has its own story. Wanderers sleeping in a porch, children playing in the streets, elderly behind their flowers. He loved walking from central station to the other side of the city where his college was located.

Essential in art is the feeling people get by looking at the painting. The story which is told by the artwork is something which is the key in these artworks.

Tronies are invented faces. The tronies in the artworks from Ruud Borgman aren’t exact copies of people. The faces are telling a story based on the experiences of the artist. Stories which are told by the expressions of the faces of people, and not by the people themselves. 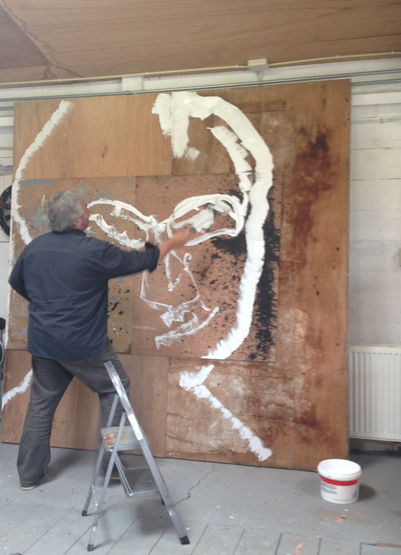